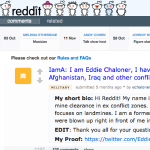 27th November 2014
Reddit
Read Eddie Chaloner’s AMA on Reddit
IamA: I am Eddie Chaloner, I have volunteered on several missions for the HALO Trust (land mine clearance) in Afghanistan, Iraq and other conflict zones, I was involved in making a major war film –Kajaki– AmA! 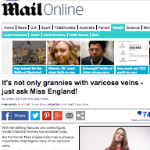 7th April 2014
The Daily Mail
It’s not only grannies with varicose veins – just ask Miss England!
With her striking features and svelte figure, model Charlotte Holmes has enviable looks. But the former Miss England also has a physical imperfection that blights many of us: varicose veins. 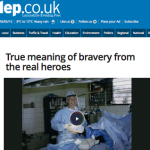 27th January 2014
Lancashire Evening Post – True meaning of bravery from the real heroes
Lancashire born surgeon Eddie Chaloner shares his medical expertise and experience of landmine injuries with a film maker to bring the story of the bravery and courage of soldiers to the big screen.