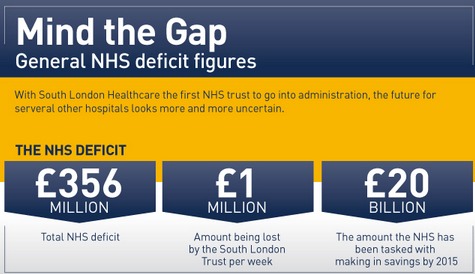 This infographic was made by Radiance Vein Clinic.

In recent times there has been a spate of articles in the press about restrictions on access to specific operations for NHS patients. Although this issue has only just come into the public eye, it is by no means a new phenomenon.

In 2009 a report on the future of the NHS written by the management consultants McKinsey and commissioned by the Department of Health was leaked to the Health Service Journal. Within the report was a section relating to a group of procedures and operations defined as being of ‘limited clinical value’, with a recommendation that the NHS should no longer offer such procedures to patients. McKinsey estimated that by no longer performing such cases the NHS could save up to £1.2 billion per year.

The NHS has traditionally declined to offer some treatments to patients – on grounds of being purely cosmetic or treatments without NICE guidance of cost effectiveness for example. In the current situation however, the NHS is widening the definition to include many proven and effective operations which provide great benefit to patients.

These procedures include operations for varicose veins, elective hernias, cataract surgery, hip and knee replacement, orthodontics and many other areas of surgical work. The list of such procedures published by some NHS Primary Care trusts can run to over 100 routine operations.

The Royal College of Surgeons of England released a briefing note in January 2011 stating their opposition to arbitrary and geographically inconsistent application of refusal to fund such procedures by Primary Care Trusts across the country. Primary Care Trusts (or PCT’s) are the administrative groups in local areas who decide how the money allocated by the Department of Health in their area is to be spent. The PCT will agree with its local health care providers (usually the local NHS Hospitals) which procedures it is prepared to fund and how many of such operations it wishes the Hospital to do. If the Hospital performs operations that are not on the agreed list, or does more than the contracted number of procedures, then the PCT may not pay the bill.

Although politicians and senior NHS officials have denied that patients are being denied access to proven and effective surgery, a survey of Primary Care Trusts conducted in June 2012 by GP magazine found that 90% of PCT’s had some form of restriction to access to a range of elective operations in place, contrary to NICE guidance.

The driving force behind this change is financial. The NHS has to cut £20 billion from its £105 billion annual budget by 2015. It seems unlikely that the policy will be reversed in the near future, as the Audit Commission and other official bodies have produced guidance for PCTs on how to implement decommissioning of specific operations.

Most of these documents recommend ‘involving’ GP’s and hospital doctors in the ‘decision making process’, but to many clinicians on the shop floor, the decisions appear to have already been made. The difficult task of explaining to a disgruntled patient why the treatment they seek is no longer available to them now falls on the shoulders of individual doctors – not the decision makers in the committee rooms. It seems that the gap in healthcare provision is set to widen rather than narrow.